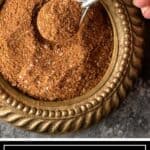 Lebanese 7 spice is a versatile blend of seven spices used in Middle Eastern cuisine. Use this recipe to make your own for the best flavor!

As you travel and dine the local cuisine in countries around the world, you'll experience unique and flavorful seasonings. Part of the excitement is tasting blends that may not exist in other parts of the world.

Lebanese baharat, or more commonly, 7 spice, is a great example of this.

Middle-Eastern countries such as Syria, Egypt, and Iraq each have their own unique blend. Even within the borders of Lebanon itself, the seven spices in the blend can vary.

Regardless of the country of origin, there are a few individual spices that appear in almost every version of Lebanese seven spice; allspice, cinnamon, clove, and nutmeg.

Three of those four spices are in my Lebanese seasoning recipe, as this version doesn't use cloves.

If you are fortunate enough to have a local source for the whole spices to grind yourself, by all means, do so! Not only are the flavors of whole spices more vibrant, but in many cases, they also are less expensive than buying them ground.

To determine how much of each whole spice you will need, feel free to use my handy chart for converting whole spices to ground.

How to store homemade spice blends

To preserve the freshness of Lebanese 7 spice, or any other homemade spice blend, you'll need to keep them in an airtight container. In addition to keeping them dry, it is also important to keep fresh spices out of bright sunlight.

A cool, dark pantry or spice cabinet is the perfect place to store them. If they're stored properly, homemade spice blends typically keep well for up to 6 months. 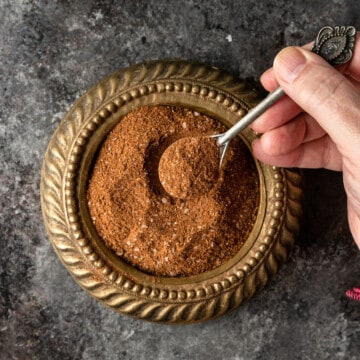 Hi Kevin, just wondering If you have a recipe for Lebanese Sujuk spice blend. I hope I’m spelling that properly,
It is used to make soujouk flat bread with meat sauce and cheese. I saw it on the food network but can’t seem to find a recipe for it.
Thanks in advance.

Lori I am unaware of a specific Sujuk spice blend, but I have heard of soujouk which is a dry, spicy and fermented sausage. It is use don the flatbread with a sauce like my Lahmachun. I would just use my Lebanese 7 Spice blend. Hope this helps.