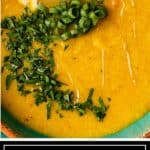 This Lebanese lentil soup recipe features red lentils, veggies and spices in a flavorful aromatic broth. Make this tasty soup in only 30 minutes!

When you’re craving soup, the last thing you want is to spend hours making it. That’s one of the nice benefits of cooking with lentils; they need very little time to cook.

Another great benefit is, lentils and other legumes can be pureed to change the consistency of a dish. For this soup recipe, we pureed them to make the broth creamy without using heavy cream or starchy thickeners like roux. This keeps the calories and fat lower than many other creamy soups.

Of course, if you like a bit of texture in your soup, you don’t have to puree them at all. This is the case with Moroccan harira; it’s a beef and lentil soup with a texture that’s almost like a stew or chili.

Popular items on a Levantine mezze in Lebanon are typically savory bites like couscous cakes, corn fritters, and kibbeh croquettes.

Oftentimes, those small bites are meant to be a substitute for a heartier main dish meal. This doesn't mean that you couldn't serve a small bowl of soup like this one. It could be a nice addition to that mezze!

Because they grow in pods like peas and beans, lentils are classified as legumes. They’re a great source of protein and fiber, and also low in fat, making them a healthy substitute for meat.

Because they cook so quickly and don’t need to be soaked before cooking, they’re fantastic for using as the base for this delicious Lebanese soup.  They come in several varieties but the most common are brown, green, red/yellow, and black.

Red lentils are also known as “split lentils” and of all the varieties, red lentils require the least amount of cooking.

They are called split lentils because they’re broken into pieces. This makes them easy to puree and use as a thickener. I love the beautiful yellow color they have after they’re cooked.

I add a half cup of white rice to help make the lentil soup a bit heartier. if you’d like to omit the rice, you can do so. I don’t recommend substituting brown rice for white. Brown rice requires a longer cook time, which could cause the lentils to become mushy.

The gorgeous yellow color of this Lebanese lentil soup comes from a couple of things. Primarily, it’s the red lentils, which take on a yellow color after cooking, but it’s also from turmeric. In addition to the gorgeous color, turmeric is very aromatic and known to have a host of health benefits.

The other primary seasoning in the soup is a Lebanese spice blend known as seven spice. This is an aromatic combination of allspice, black pepper, cinnamon, coriander, clove, cumin, and white pepper.

It’s very simple to make seven spice, or you can find it pre-made at most specialty markets, or online retailers like Amazon.

The process of making this soup is very similar to making any other creamy soup, with one significant difference.

Rather than making a roux of fat and flour to thicken the broth, the thickness of this soup depends on how much you puree the red lentils.

For a loose, brothy soup

Cook everything as directed in the recipe and stir to combine, but don't puree any of the ingredients.

To create a partially creamy soup

If you want a bit of texture in the Lebanese red lentil soup, puree only a portion of the ingredients.

While making the Lebanese lentil soup recipe, just before you would normally puree the pot of soup, remove and reserve anywhere from 1 to 3 cups of the cooked mixture.

Puree the contents left in the pot, then stir the reserved mixture back in.

To give the soup a creamy consistency as shown in the photos, simply follow the lentil soup recipe as written in the recipe card below.

To save space in your freezer, ladle the soup into zip-top freezer storage bags, then lay them flat on the shelf of the freezer. Once frozen, the bags may be stacked. 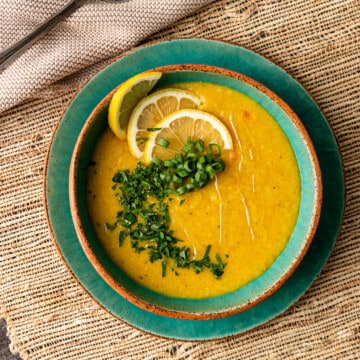 I oftentimes add shredded rotisserie chicken before simmering the soup in Step 3, to create a heartier meal.

Kevin, would it be possible to have the headings of your wonderful recipes not so "ink heavy". It looks great, but is really greedy for ink. thanks, Betsy

Check it out Betsy, I think I fixed it!