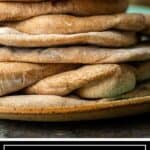 This pita pocket recipe is adapted from Claudia Roden's recipe in her book, The New Book of Middle Eastern Food.

Nearly every country on Earth has one thing in common... bread! Although some breads are unleavened (made without yeast) while others are yeast-risen, one thing is clear. Soft, warm bread is something that we all find comforting and delicious.

The delicious Middle Eastern leavened flatbread I'm sharing the recipe for today is known by many different names, as well as several alternate spellings!

So, what is naan, and how does it compare to pita?

As mentioned above, flatbreads, including this recipe for whole wheat pita bread, are slightly leavened with yeast. In comparison, naan is an unleavened flatbread.

Through a combination of yeast and steam in the oven, pita bread rises as it bakes, creating pockets of air between the layers.

As a result you can slice them open and stuff them with delicious fillings like beef, roasted vegetables, Mediterranean hummus, and shawarma.

Like most basic bread recipes, you need just a few simply pantry essentials to make this recipe.

Use that same microwave method to help open up closed pita pockets. The steam from the towel helps separate the layers of bread.

These are perfect for filling up with vegetables with dip, grilled shawarma, toum with a Beef and Lamb Kabob - Koobideh or falafel and so much more! 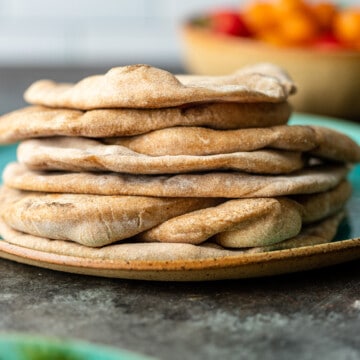 This looks great and so easy! My family is going to love this recipe! Can’t wait to make this!

Yes, please! My family would go crazy over these pita bread!

We LOVE pita bread and this is seriously delicious!!

I love making pizzas and pita bread! This recipe is great for the whole wheat option!

Your photos are gorgeous and gave me confidence to make it myself! So delicious and surprisingly easy.

This Khubz is seriously making me hungry!

I've been looking for a whole wheat pita bread and this did not disappoint!!

I am so glad you came across this recipe then!

I like that they are whole wheat because they are a whole lot better for you. I also give them a deep hardy flavor. They are so good, I recommend trying them.