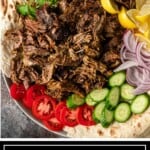 Slow-roasted lamb shawarma gets its incredible flavor thanks to a marinade filled with spices and seasonings. Serve with fresh veggies, creamy sauces, and pita for a flavorful meal that will fill you up!

I’m always looking for new Middle Eastern recipes to try. As I was thinking about what to endeavor next, it hit me – lamb shawarma! If you’ve ever traveled to a big city like New York, or even outside the United States, you have probably seen this popular street food. If you’ve never tried it before, lamb shawarma is traditionally used as a filling in a hearty sandwich. Trust me, you won’t be hungry for at least a few hours.

There tends to be some confusion surrounding these two dishes, and their names are often used interchangeably. But they are, in fact, two different things that come from two different parts of the world.

Gyro is Greek, and shawarma is Middle Eastern. They can both be made with lamb, but the gyro can also be prepared with beef, chicken, or pork. Shawerma can be made with chicken or turkey as well. The spices involved in roasting the meats are also very different.

Now that you’re aware of those differences, let’s talk shawerma!

HOW TO MAKE LAMB SHAWARMA

Prepare Your Marinade. Add the onion, garlic, and ginger to a food processor – you want it to blend down so that the mixture is finely minced. Add the fresh cilantro and parsley, plus all of the other spices. Last, but not least, add the vinegar and oil. Blend until becomes a coarse paste. Then, coat the meat with the marinade and refrigerate (covered) overnight.

Cook The Meat. First, let it warm on the counter while you preheat your oven. Spread the sliced red onion in the bottom of a roasting pan, then add the meat. Squeeze out any remaining marinade and pour chicken stock into the pan.

Garnish & Serve. You can serve in a warm pita with sauces, fresh veggies, and fresh parsley on top. Add a bit of lemon to finish off the dish and enjoy!

Can You Reheat Lamb Shawarma?

Absolutely! Simply reheat leftovers in the oven until warmed through, adding a splash of stock as needed for moisture.

Make sure that you store any leftover shawerma in an airtight container in the fridge so that it stays fresh. It will keep for 3-4 days.

Prepared with several different spices and seasonings, lamb shawerma is filled with flavor! It is marinated in garlic, turmeric, cinnamon, and cardamom, lending it a complex flavor profile. Tangy yet spicy, warm yet intense — there isn’t much missing from this dish!

Why Is It Called Shawarma?

Shawarma is an Arabic rendering of the Turkish word çevirme 'turning', referring to the turning rotisserie. Since this dish is traditionally prepared on a large skewer that turns, it makes sense! It originated in the 18th or 19th century in the Ottoman Empire, which is where modern-day Turkey is located. Enjoy! 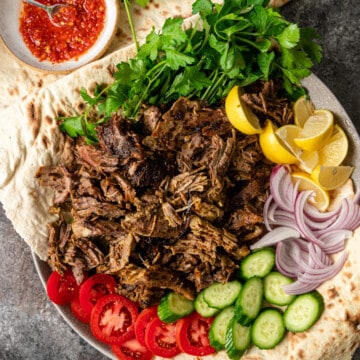 Hi, smells delicious - already marinating in the fridge! Are you sure about the measurements of cumin? Its in tablespoons, everything else in teaspoons.

Yes, it's correct. Enjoy this one Michael!

Thank you! I’m making 16lb for my brother’s wedding.

looks amazing, I love shawarma a lot, even though shawarma does not mean turning in Arabic. I think name is of a Turkish origin. Some also add pomegranate molasses to the marinade!

I really like the pomegranate molasses idea Farida, thanks!

I have home raised lamb legs in the freezer and will be trying this recipe. Going to get one out to defrost right now! 😀

Fantastic! Please let me know how you liked it Barbara.

Kevin, it is fantastic! I wish I could post a photo. We love it. 😀

o happy to read this, thanks Barbara!

Looks Amazing 😋 I do similar with chicken

Great for large crowds and so tasty, thanks Eileen!