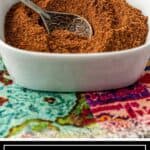 Baharat spice is a traditional seasoning used in Middle Eastern cuisine. Make it at home to add its bold flavor to your favorite recipes.

What is baharat spice?

This all purpose seasoning mix is a combination of warm and earthy spices that add sweet and smoky flavors, with just a bit of heat.

Baharat is the Arabic word for "spice", so it goes without saying that the blend can vary quite a bit from region to region.

Just as garam masala is a staple in Indian cuisine, baharat is used in many Middle Eastern dishes. The ingredients can vary,, but nearly every version include black peppercorns.

Another common blend of spices, ras el hanout has several additional ingredients that make it more fragrant and slightly sweeter in flavor.

And although Lebanese zaatar comes from the same general region, it has a completely different base of ingredients. The flavors are nuttier and tangy, and it is most often found in dips or breads.

It’s simple to make homemade spice blends, and this baharat recipe is no different. Just toast the whole spices, then grind them and combine them together!

Video: How to Make Baharat

Watch the video located in the recipe card below to see just how easy this recipe is to make!

You can often find a bowl of this all purpose seasoning on Middle Eastern tables, just as we keep salt and pepper on ours here in the U.S.

I like to use it as a dry rub for grilled chicken or steak, or to add flavor to hard boiled eggs. There are plenty of other ways to incorporate it into your cooking, too.

Another killer spice blend you've opened my taste buds to, thanks! Especially for the whole to ground ratio measurements!

So glad you are following along and enjoying these Nat!