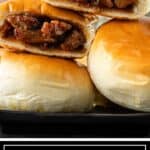 China is a country with many different languages and cuisines, Cantonese being one of them. One of the country’s popular food experiences is dim sum.

Basically, dim sum consists of an assortment of small or bite sized foods served with tea. BBQ pork buns, or pork bao, are a popular favorite.

There are two ways to prepare these pork appetizers, by baking them in an oven or steaming them.

Steamed char siu bao is delicious, but the process is more labor intensive. So, I prefer to bake them.

In researching this recipe for baked pork bao, I wanted THE fluffiest buns possible. The goal being, to replicate the ones I enjoy at my favorite Dim Sum house Jasmine in San Diego, California.

What is the trick? Tangzhong, an Asian cooking technique for making soft, fluffy yeast bread.

The tangzhong method calls for briefly cooking a portion of the flour and water to make a paste, which is then combined with the rest of the ingredients. By using hot water, you can actually add more liquid to the dough because flour can absorb twice as much hot water as cold water.

The super-hydrated dough yields rolls that are not just moist but also fluffy because the water converts to steam, which acts as a leavening agent, creating rise.

The extra water also increases gluten development, giving the bread the structure it needs to contain the steam rather than letting it escape. (Source: Cook's Illustrated)

How to make pork bao dough

The Tangzhong technique for making dough involves creating a thick paste of flour and liquid in a pan on the stovetop. This is similar to the technique of making French choux pastry, for the shells of cream puffs and eclairs.

1. Create and cook the dough paste.

If you have a hook attachment for your stand mixer, it will handle the kneading for you. Otherwise, you’ll have to knead it by hand for 15 minutes.

3. Rest and rise the dough.

You’ll need the dough to almost double in size, which takes about an hour. Place it in a nice warm spot. When the weather is cool, I like to use my microwave!

While you wait for the dough to rise, go ahead and make the pork filling.

The filling for the buns starts with char siu, which is a sweet and salty Cantonese BBQ pork. When that is ready, all you’ll have to do is add a few spices, then simmer it in a skillet with some chicken broth and let it reduce. Super easy!

The filling for the buns starts with chopped char siu. When that is ready, all you’ll have to do is add a few spices, then simmer it in a skillet with some chicken broth and let it reduce. Super easy!

How to form Chinese buns

1. Roll and shape the dough.

After the dough has risen, punch it down and turn it over onto a floured surface.

Roll it into a ball and cut it into 12 equal pieces.

PRO TIP:
To prevent the dough from drying out, cover the pieces you aren’t working on with a damp kitchen towel or sheet of plastic wrap.

Roll each cut piece into a small ball, then use the palm of your hand to flatten it.

Shape each circle by hand or with a rolling pin, keeping the center slightly thicker than the edges. I use my fingers to press and spread the dough, leaving a mound of dough taller in the center than the edges (see top left square in photo below).

NOTE: It’s important to add the filling sparingly. Otherwise, the buns could split open during baking. To prevent this, add no more than 1 tablespoon of filling per bun.

Rather than trying to explain all of the steps here, you can see instructions for each step in the recipe card, or watch my video (in recipe card) to see how it's done!

3. Seal the buns and let them rise. After adding the filling to each bun, you'll seal them and allow them to rise on a parchment lined baking sheet for another hour.

Before allowing the Chinese BBQ pork buns to rise, you can freeze some of the prepared buns to bake or steam in the future.

Just be sure to thaw completely and allow them to come to room temperature before rising and baking.

Before baking, brush each bun with egg wash.

Immediately after removing them from the oven, brush some glaze onto each of the tops. Then, let them cool a bit before you dig in! 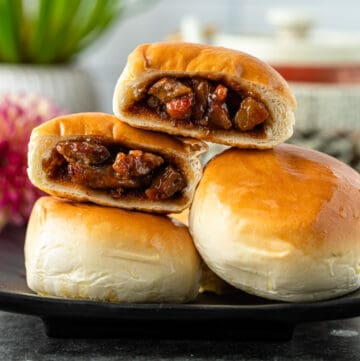 After years of cooking these recipes for family and friends, I decided to share my passion for the foods along the ancient Silk Road with you, too. From the Mediterranean, Middle East and Persia to India and China, I’m serving up sweet and savory recipes using traditional and modern cooking techniques. Read More →