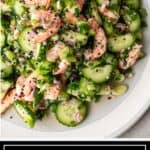 Sunomono salad is a healthy, refreshing, sweet and sour cucumber dish. Make this simple recipe for shrimp cucumber salad for an easy appetizer, side salad, or main dish!

Typically, the late summer months arrive with a bumper crop of fresh cucumbers in my garden. This time of the year, I’m always thinking of new and delicious ways to use them.

Japanese cucumbers (known in Japan as Kyuri) are used to make a variety of delicious dishes, from sushi and a variety of salads, to cucumber gazpacho, and a cold cucumber miso soup called hirajiyu.

Description:
Sunomono refers to a variety of Japanese, vinegar-based dishes. The Japanese word “su” translated to English means “vinegar”. The most popular version is made with very thin slices of Japanese cucumbers. When shrimp, crab, and/or other seafood are added, the dish is called seafood sunomono.

Using thinly sliced cucumbers isn't a requirement for the salad, but slicing them thinly does make it easier for the cukes to soak up the vinegar dressing.

There are cooked shrimp in today’s recipe, which makes it perfect for an entree size dinner salad. Of course, the shrimp cucumber salad could be served as an appetizer if you’d like.

Also, the ingredients for this recipe can be adapted to suit your taste preferences. Treat your seafood sunomono just as you would any salad recipe. If you want to add veggies, use different ones, and/or omit the shrimp, you can absolutely do that!

How to Eat Sunomono Salad

Whether you serve it as an appetizer, side dish, or entree salad is completely up to you. As a main entree, it’s delicious served on a bed of steamed rice.

If you’ll be making this recipe for an appetizer, consider serving it in martini glasses or shrimp cocktail cups. It makes a beautiful presentation! 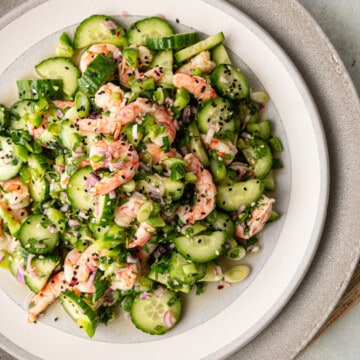 So glad you enjoyed this one Benjamin!