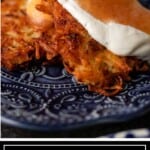 A beloved Jewish tradition, potato latkes are golden fritters made up of shredded potatoes and onions. These crispy potato pancakes are salty and savory, making them an ideal appetizer or side dish for any hungry crowd.

Every Jewish family has their own take latkes, whether it’s a special frying method or a favorite dipping sauce. This potato latkes recipe is foolproof whether you’ve grown up eating these salty bites or you’d like to try making them for the first time! The savory aromas of simmering onions and fried food that fill the kitchen while making potato latkes always bring me that warm holiday season feeling.

These are traditional Hanukkah eats, but I always wind up making them throughout the year — they’re so simple and delicious. I love them topped with homemade applesauce (which is also included in this recipe), but they also go great with creamy hummus.

Whether you’re looking to shake up your typical breakfast or you’re hoping to carry on a family tradition, this potato latkes recipe is sure to satisfy.

HOW TO MAKE POTATO LATKES

What Type of Potato is Best for Latkes?

Russet potatoes tend to be the best to use since they help keep the fritters binded together. Yukon gold or red potatoes will work similarly.

What’s the Difference Between Latkes and Hashbrowns?

Though both involve fried, shredded potatoes, potato latkes include egg and breadcrumbs. The finished result is a compact, bound-together patty that is more like a pancake than a hashbrown.

What Toppings are Good With Potato Latkes?

Traditional toppings include sour cream and chives or applesauce, but these potato fritters are very versatile. Spread creamy hummus on top, dip them in a cool tzatziki, or even make them breakfast-friendly with cream cheese or eggs.

What to Serve With Latkes?

Traditionally, potato latkes are served on Hanukkah alongside beef brisket or kugel. However, you can serve these with any roast meat, cream cheese, and smoked salmon, or sautéed vegetables. They’re very versatile and can function however you’d like them too! 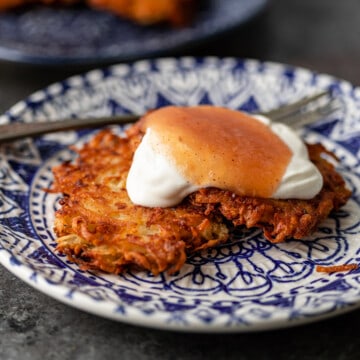 Thank you I actually made them last night and they’re awesome!!!

Yay! So glad you enjoyed this one Coleen! Thanks for taking the time to come back and let me know. 🙂

Hi,
We made them yesterday for Hanukkah and they were delicious.
Thank you.
Happy holidays.
Vered 🌹

So happy to read this Vered! Happy holidays to you too!

Hi Kevin,
Silk Road is the most interesting in so many ways for individual that wish not to follow routine and bring new life to kitchen, Congratulations and Zmerry Christmas,
Bahram

Much appreciated Bahram! Merriest of Christmas' to you and yours... 🙂

Saw them yesterday and had to make for dinner. OUTSTANDING! I actually decided to use the garam masala twist instead of cinnamon in the applesauce you mentioned. So good!

Thank you so much for trying this and reporting back Naomi!

I LOVE many of your recipes (both on THIS site, as well as on your other site); however, there is a "mistake" in this recipe for potato latkes....The "Course" is NOT "breakfasts", as stated in the "recipe" portion. Potato latkes are either a side dish to a meat meal (as you properly state in the "descriptive" info above this recipe) such as brisket or other roasted meats; as a "dairy" lunchtime -or- dinnertime meal in itself, served with sour cream (-or- applesauce!); -or- included as either the "main" -or- side dish accompanying a vegetarian meal, but NOT a "breakfast" meal...TOO HEAVY!!!!!!!....I GUESS ~ if someone doesn't mind eating such a heavy, greasy food for breakfast, it COULD be eaten at that early-in-the-day meal (just like someone COULD eat a thick, heavy rib steak for breakfast IF they WANTED to; there's no "law" forbidding it. But, IF you listed a rib steak recipe here on your recipe site, I am willing to BET that you would NOT list the "Course" as "breakfasts"!)

Anyway, listing the wrong "Course" might just be a "typo" -or- overlooked "detail" on your -or- your clerical person's part! (It's just that ~ over the years ~ I do not find many Ashkenazi/Eastern European Jewish recipes on non-Kosher/non-Jewish recipe sites, so I am "disappointed/sad/"blue" ~ "ungebluzen"!!! ~ that there's an error in THIS recipe.)

No "biggie"; just to ME, and "nobody's perfect"! (And, YES! I am giving you 5 stars, even though I have not yet made YOUR version of potato latkes. I HAVE been making a very similar version of your recipe for YEARS, but with BLACK pepper instead of white, and with matzoh meal instead of Panko. Of course, I DO add a little chopped garlic and a BIT of paprika along with the salt & pepper...I HAVE to: "Half" of my genetic makeup is Hungarian!!!)

It is indeed a side dish and quite a tasty one, thanks so much for following along both sites Cheryl.