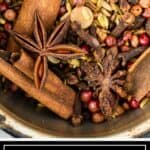 5 spice powder is a unique blend that is supposedly based on the five elements found on Earth.

However, it’s more commonly known for containing all five culinary tastes - sweet, sour, bitter, salty, and umami. This makes it a staple in any cook’s kitchen.

Make your own from scratch for rich flavor without the preservatives and other additives.

This spice blend is very common in both Chinese and Taiwanese cooking. It adds plenty of heat and flavor to dishes like Shumai.

While it can be used in almost anything, not just Asian cuisine, here are some of the most popular uses:

All you need to make this recipe is a small skillet and a spice grinder. Then toast and grind the spices for a homemade spice blend in just a few minutes!

Want to see this recipe in action? Just watch the video located in the recipe card at the bottom of post!

For a similar blend, combine the cinnamon, cloves, and star anise. Then replace the fennel seeds and peppercorns with ground ginger instead.

Or, try one of these other spice blends instead. None of them will have the same combination of flavors, but they will add the necessary spice and heat. 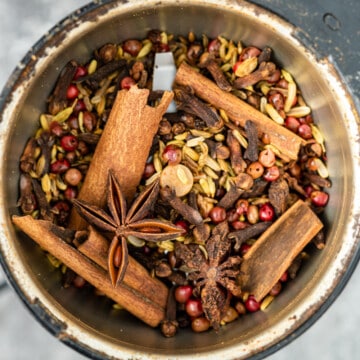 This is such an easy and flavorful recipe. We make a lot of Asian inspired food at home so this spice is PERFECT!

I am glad you found this recipe then!

This is not only a delicious recipe but it is so pretty when you are making it! Your photos are amazing! love the capture of the star anise! Be using it a lot!

Thank you! That really is a pretty spice!

So this is how to make it. Thanks for taking the time to share these spice blends. I always thought it would be harder to make. I add more cinnamon, but this base is PERFECT.

Much appreciated Ting Ting. Enjoy them all!

Is your blog and the recipes related in anyway to the Silk Road spice company, which started in Missoula, Montana? Just curious. It was a great restaurant that closed to focus on its spices.

No not at all Brian, never heard of them, but I might need to look into them. 😉