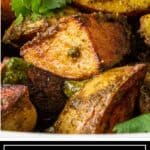 Potatoes are one of the most accessible and easy to use ingredients, and it doesn’t hurt that they’re budget friendly and nutritious, too. They’re a starchy carbohydrate, but also packed with fiber and essential minerals.

Many people associate the tuber with side dishes like mashed or creamy scalloped potatoes , but the humble veggie is great for other parts of your meal!

I use them in main dishes and even appetizers. Give them a try in a creamy Indian curry like aloo masala or in a dip, like this skordalia recipe.

Lebanon is geographically located in the Middle East, so dishes with rich spices like zaatar bread and hashweh are common. However, Lebanese cuisine has strong Mediterranean influences as well.

The use of bright fresh herbs and citrus can be found in the dressing for my Lebanese salad recipe, and of course, in today’s recipe for Lebanese potatoes, too.

Out of the hundreds of potato varieties, there are two types of potatoes; waxy, thin skinned and starchy thick skinned.

Russet potatoes are better for deep frying, but they will work for this Lebanese potatoes recipe. If you do use them, peel them.

Typically the cilantro, garlic and spices are tossed together with the fried potatoes, not pureed, but I prefer it as a sauce to coat the potatoes.

If you have an immersion blender (also known as a stick blender), it's the best tool to use for making the sauce. If you don't have one, a blender or small food processor will do.

Cilantro has a little bite, but it's not spicy. What really gives the punch of heat to the batata harra sauce is red pepper flakes. If you aren't a fan of spicy food, or you like lots of spicy heat, simply use more or less pepper flakes to suit your tastes.

The trick to pan frying anything is controlling the burner heat. If the pan and oil are too hot, the outside of the potato is likely to burn before the inside cooks through.

You'll have the best chance for success keeping the heat on the lower side of medium than on medium-high. This is especially true if you use a cast iron or stainless steel pan, as they are great at retaining heat.

With oval and round vegetables, cutting consistent sizes is sometimes easier said than done! Just do the best you can to keep the potato chunks as close in size. as possible.

While it's completely okay to pan fry potatoes without boiling them, there is a risk that the outsides will burn before the flesh inside cooks through.

For the best chance of success, chop the potatoes and put them into a pot of boiling water for 2 minutes first. Then, drain them in a colander while you preheat the oil in your frying pan.

Do you need to boil potatoes before pan frying?

When making batata harra, parboiling the potatoes helps to ensure that the inside cooks completely. Otherwise, it's easy for them to burn on the outside and still be raw on the inside.

What should I serve with batata harra?

The spicy cilantro sauce adds the perfect seasoning for this Lebanese potatoes dish, or serve them with Lebanese garlic sauce instead. The flavors are delicious with just about any grilled meat, but especially kafta kebab. 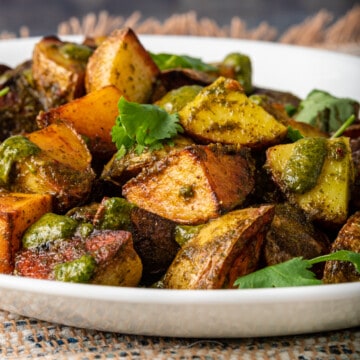 This looks like it would go great with a lamb dish. I have a freezer full. Time to plan a meal.

These are incredible potatoes with just the right amount of spice and flavor. A must try in my book. Thanks Kevin

One of my favorite appetizers,,.
However we don't add the sauce, just cilantro and shatta sometimes but it's a great idea!

Thanks Farida. While I love it the traditional way, I find the sauce coats everything. Both ways are wonderful!

This sounds yummy, and I like that you make a sauce. I have some cilantro I need to use, and if I’m running a little short, the stems will help fill in. I’ve been trying to avoid carbs a bit, but I have potato’s that need to be cooked so these would really be tasty, and i think I have ground beef and everything to make the kabobs.

Excellent, give this a go Cathy! These have a wonderful kick!