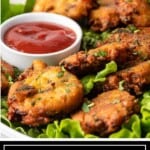 With a spiced vegetable center and crisp exterior, Potato Pakora is satisfying in both flavor and texture. Enjoy it while it’s hot and fresh! Serve with a dipping sauce for a delicious, traditional Indian appetizer or side dish.

Peppers, onions, and potatoes are seasoned with a variety of common Indian herbs and spices, including coriander and cumin, chaat masala, turmeric, and chili powder. I like to slightly mash the potatoes for a particularly light center, but many people leave their potatoes in larger chunks or simply slice them. It’s up to you!

There are so many ways to enjoy pakora: make them with corn, onions, or chewy paneer cheese. And almost any Indian fritter is made better with tomato chutney on the side!

HOW TO MAKE POTATO PAKORA

1. Prepare the Potatoes. Skin the potatoes before cubing. Boil a pot of water, just enough to cover the potatoes, with a bit of salt. Boil until the potatoes are tender. Drain and allow the potatoes to cool. Set aside.

2. Season & Mash. Add all of the spices and vegetables to the bowl, leaving out only the batter ingredients and oil for frying. Mix together before adding the diced potatoes and mashing in the mixture. Leave a couple of chunks!

3. Make the Batter. Sprinkle the flour and pour the water over the potato pakora mixture and mix together to form the batter.

4. Fry the Pakora. Heat your frying oil of choice over medium heat. Use two tablespoon scoops of the aloo pakora batter to form one patty. Fry on each side until golden brown.

5. Drain & Repeat. Transfer the potato pakora to a paper towel to drain and repeat with the rest of the batter. You should have about 24 Indian potato fritter patties at the end.

6. Serve. Sprinkle with salt and serve right away with your dipping sauce of choice.

What is pakora batter made of?

The batter used to make potato pakora is incredibly simple: just besan flour and water. If you do not have besan flour, then you can use regular all-purpose flour as a substitute.

How do you store and reheat potato pakora?

Fried recipes aren’t the best for refrigerating and freezing. I recommend eating them right away when they are crisp and fresh.

The batter, however, will keep for up to 3 days in the refrigerator and can be made a couple of days in advance.

If you’d like to freeze the batter, then scoop out the patties and line them up on a baking sheet. Allow them to freeze and then transfer the frozen fritters to a bag or airtight container. They’ll keep for a couple of months, and can be thawed and prepared at your leisure.

To reheat fritters and resurrect some of that crispness, pop them into the oven until warmed through the center.

While it contains mostly vegetables, aloo pakora is fried in oil. As a result, it isn’t going to do you any favors on your diet. The bulk of this pakora consists of potatoes, which are full of carbohydrates. So, while excellent for energizing your body, it isn’t necessarily the best recipe for weight loss.

Why are my pakoras not crispy?

There are a couple reasons why your potato pakora may not come out as crisp as you’d like.

The most common cause is using oil that’s too cool. It needs to be at least medium high (180C or 350°F) to ensure the batter fries and does not instead soak up the oil without crisping. Additionally, it’s important to allow the fritters to drain properly as they cool so that excess oil isn’t soaked into the patty. 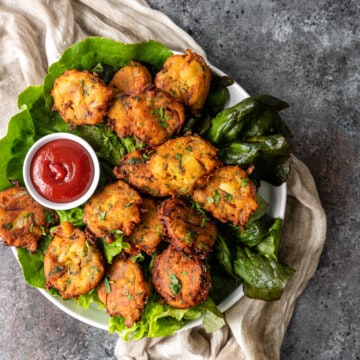 Do you have a recipe for chaat masala? I can't seem to find it in your index.
Thanks!

And am indian and i approved this

Thanks so much Ramya! 🙂

Happy Birthday to you Ramya! So happy this recipe came out on your birthday. These are wonderful and I hope you enjoy them!