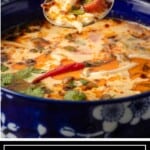 Tom Kha Gai Soup is absolutely packed with flavorful Thai ingredients. With chicken, lemongrass, galangal, chilis, and coconut milk in the mix, it’s a mouthwatering mix of sour, savory, salty, and silky texture. Serve with rice or as many vegetables as you’d like!

Asian cuisine has an abundance of spice and flavor, and Thai cuisine certainly tops all the rest!

Tom kha gai soup is one of the most popular menu items in Southeast Asia – and all around the world! It’s a creamy chicken coconut soup with a variety of aromatic herbs, savory mushrooms and sauces, and spicy chilis.

Thai coconut soup is actually quite simple to prepare. It takes just about 30 minutes of simmering, seasoning, and stirring. It’s also incredibly customizable! Almost any vegetable or protein can be added to this Thai coconut soup and be absolutely delicious.

I personally love eating tom kha soup with rice or flat noodles. I highly recommend it!

What is the difference between tom yum and tom kha gai?

Tom yum and tom kha are actually quite similar, but they have a key difference that sets them pretty far apart in taste and texture.

Both tom yum and tom kha gai soup have a hot and sour soup base, each usually containing a variety of vegetables, herbs, and some kind of protein.

Tom kha soup has an additional ingredient, however: coconut milk. This gives a bit of a thicker, creamier texture.

How long does chicken coconut soup keep in the fridge?

Stored properly in an airtight container, tom kha soup will keep for up to 4 days. Reheat just what you plan on eating, as it should not be reheated and chilled multiple times.

I would not recommend freezing this soup. The coconut milk, though not dairy, loses its normal creamy texture when frozen and thawed.

It isn’t, but you can easily make it so. Here are the substitutions I recommend making for a vegan-friendly Thai coconut soup: 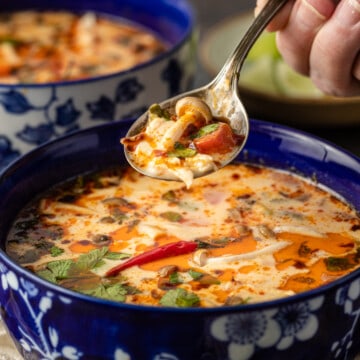 I love this one wow can't wait to make it again.