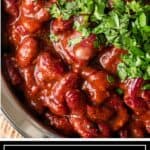 Rajma chawal is a popular Indian masala curry made with kidney beans and served with rice. Make this rajma recipe for a warm meal in just 40 minutes!

Curries are one of my favorite comfort food meals to make and to eat, especially as the weather turns cooler.

Technically, a curry is just a well seasoned stew, and who doesn't love a hearty bowl of stew to warm up from the cold with?

As this rajma recipe proves, even meatless meals can be hearty and filling! My original bean curry recipe included lamb back in 2014, when it was first published on my other food site, Kevin is Cooking.

The lamb has been removed from the recipe, but red kidney beans are packed with enough fiber to make the dish hearty.

Traveling to India offers the opportunity to experience the flavors of plenty of different Indian masala curry dishes, and of course, there are popular curries made without a masala seasoning as well.

Some of my favorite Indian curry recipes are chickpea masala and mango chicken. And then there's everyone's favorite, the Punjabi butter chicken recipe.

Description:
A vegetarian Indian masala curry of kidney beans (or other rajma beans) simmered with tomatoes and served with or over white rice.

Rajma masala is an Indian curry, but it's most popular in the northern states of India, where it's an integral part of their diet.

Despite being a vegetarian dish, rajma chawal is actually quite rich and hearty. The tomato-based gravy gives it a pleasing, stew-like consistency.

NOTE:
If cooking dry beans from scratch, be sure to reserve a cup of the cooking liquid to use later in the recipe.

The first step in this recipe is creating a paste to thicken the curry with. This curry paste is a blend of white onion, serrano chiles and water.

Either a blender or small food processor is perfect for making the puree. It will be very loose but after mixing it with ghee and cooking for a few minutes, it thickens up and will have a paste-like consistency.

The kidney beans, tomato passata, some ginger and garlic, and plenty of delicious spices go into the pot with the thick rajma paste.

Turn down the heat and let the rajma masala simmer for 15-20 minutes. This is the perfect time to steam or boil some rice!

Other than a bit of chopped cilantro for garnish and rice for serving alongside the dish, there isn't much else needed.

Some warm naan, dosa, roti, or other flatbread like simit or khubz might be nice; you'll want something to help sop up all of the delicious gravy in your bowl.

If you have any leftover curry, refrigerate it in an airtight container and use it up within 5 days.

For longer storage, it should freeze well for 3 to 4 months.

To reheat the dish, simply thaw it in the refrigerator overnight, then reheat in a saucepan over medium heat until it's warmed through.

Are rajma masala and rajma chawal the same?

Yes, both are names for the Indian kidney bean curry, and are used interchangeably.

Can I freeze kidney bean curry?

Kidney beans and rice both freeze well, so if you have any leftover rajma chawal, it should keep well in the freezer for 3 to 4 months. 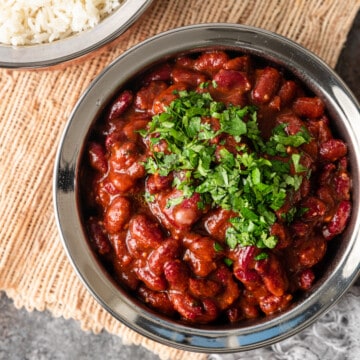