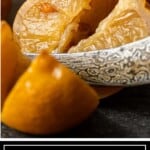 The salty, sweet, tangy, and tart taste of Moroccan preserved lemons is unparalleled. When the lemon softens and loses its abrasive sour flavor, it becomes an incredibly bright and refreshing addition to a number of dishes.

Something that I love about Moroccan cuisine is its abundance of warm spices and seasonings. Dishes generally feature very bright, refreshing flavors, whether they be sweet, spicy, salty… or all of them put together!

Moroccan preserved lemons are a great example. Used often in Moroccan dishes, they are drenched in a salty liquid and infused with earthy herbs and spices.

What we’re really doing is pickling the fruit, taking away some of that harsh tartness, and softening the peels.  They’re very easy to prepare and become more delicious with each passing second.

Don’t want to wait the full month needed in this recipe? Try out my quick pickling recipe for lemons instead for a quick fix. I also recommend that you check out my shakshuka, kafta kabob, and fatteh recipes for another taste of the delicious flavors that Morocco has to offer.

HOW TO MAKE MOROCCAN PRESERVED LEMONS

2. Prepare for Preserving.  First, wash and dry each lemon. Carefully cut an X into six of the fruits, starting from the top and moving down towards the base. Take care not to cut through the lemon completely - the quarters should come together at the base and remain attached. Then, press the seasoned salt tightly in the cuts.

3. Preliminary Jarring.  Pack all six lemons into an airtight jar, leaving as little space between them as possible. Juice the remaining citrus, adding the liquid to the jar.

4. Continue Packing the Jar.  Store in a cool, dark place for 5 days while the first batch of fruit starts to soften and release juice. Afterward, press more seasoned lemons into the jar until no more can fit. It’s important to pack them tightly so that they will not dislodge during the preservation process.

5. Preserve.  Let sit for at least 1 month. Rinse off the brine before using and refrigerate the jar once opened.

Their lemony flavor is enhanced, and they are rather salty. They are sour, as you’d expect, but also tangy and bright. When it comes to adding strong citrus flavors to dishes, they really can’t be beaten.

How are preserved lemons different from fresh ones?

While the preserved fruit is still tart, the flavor isn’t as sharp or mouth-puckering. The rind also loses its toughness and bitterness, making it soft and enjoyable to eat. However, the pickled lemon lacks the zestiness and bright scent of the fresh fruit.

At the end of the day, which one to use depends on the nature of the dish you are preparing.

What are preserved lemons used for?

Some eat them on their own as a snack, but they are most commonly used in other dishes. You will often find them in recipes for dressings and sauces, as well as in fish and chicken tagines. They are also incredibly delicious when chopped and served with roasted vegetables or in salads. 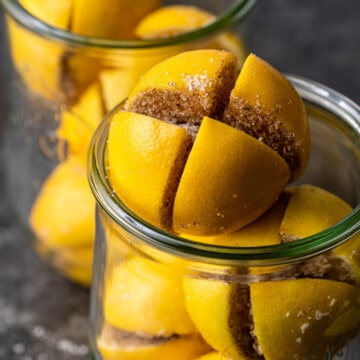 Hi! When it says to add more lemons after 5 days, does that mean you need more than the 10 the recipe calls for? If so, how many more?

I can usually get about 3 more lemons squeezed in after the initial 5 day process Pam. Hope this helps. These are so good!