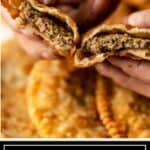 Looking for a yummy snack that you can take on the go? Look no further than Chebureki! This Crimean street food is filling, crispy, and unique. It features a beef or lamb filling, spices, and onions that have been stuffed in a flaky crust!

One of my favorite things about traveling is the chance to try out the local cuisine. It's fun to take notes on the flavors and ingredients in the dish, then return to the US and attempt to recreate them at home. I will say that there are some recipes that I just can’t manage to make myself. Maybe it’s also because enjoying local specialties is as much about taking in the surroundings as it is about the food itself!

All of that to say, I’m super happy with how my attempt at chebureki came out. I first tasted these in San Francisco from a Russian lady who was my neighbor (she also made classic Russian piroshki) in the Marina district where I once lived. Inna would let me know whenever she had made them fresh and they were just the BEST for breakfast!

These hail from Crimea, located on the shores of the Black Sea, which is where she was from originally. They look quite similar to giant fried dumplings or empanadas, and I was immediately intrigued. When I took a bite and discovered the savory meat filling, I was hooked.

Let's travel west from the Silk Road trade route to the Crimean peninsula, for one of their most popular street foods.

Begin your travels in the city of Kuban, located in southern Russia. Head west towards the Black Sea to the Strait of Kerch and across the Crimean Bridge (also known as Kerch Bridge), where you'll arrive in the Republic of Crimea.

Description:
A popular regional dish of Crimean Tatar cuisine, chebureki are pan fried meat hand pies with a filling of ground lamb or beef, spices and bits of onion and/or peppers.

1. Prepare The Dough. Start by sifting your flour into a bowl of a stand mixer (you can also mix by hand if desired). In a separate mixing bowl, add the salt, hot water, oil, and vodka and whisk to combine. Add the liquid mixture to the flour and mix on medium-low until the dough starts to form. Play around with adding more flour or water if you’re unhappy with the texture. Mix until a soft and smooth dough forms, then cover with a kitchen towel so that it can rest for 30 minutes.

2. Make The Filling. Place the ground meat in a large mixing bowl. Then, add the onion, garlic, salt, pepper, paprika, cayenne pepper, parsley, and water to a food processor. Mix until the ingredients form a purée, then add it to the meat. Mix to combine and then set it aside.

3. Create The Pies. Divide the dough into 12 equal parts and form balls using your hands. Use a rolling pin to roll the dough out into an 8-inch circle. It should be quite thin! Spoon out 3 tablespoons of meat mixture into one half of the dough circle. Fold the other half over the meat filling and press the edges together. Use a fork to crimp the edges of the dough, and remove any excess.

4. Fry The Meat Pies. Using a 12-inch or larger skillet (or cast iron pan), fill with ½-inch of vegetable oil and preheat it to 375 degrees F. Fry in batches (as not to overcrowd the pan) until golden brown, about 2-3 minutes on each side. You can drain them on a paper towel if there is a lot of excess oil. Enjoy ‘em while they’re hot!

Want to see the entire process from start to finish? Just watch the video tutorial in the recipe card at the bottom of this post!

Can you freeze chebureki?

Absolutely! You can freeze these meat hand pies raw or fully cooked. They will last in the freezer for about 1 month. If you do end up freezing them raw, make sure not to let them thaw before placing them in the oil. And watch out for hot oil splatter when you fry them up!

What should I serve with chebureki?

I love the idea of eating this dish as a light lunch or an afternoon snack. Any dipping sauce of your choice would be great with these little meat pies. Good choices include ajvar relish, shatta sauce, or even some sour cream.

What Meat Is Best For Chebureki Filling?

You can feel free to use any type of ground meat. Traditionally, lamb is a popular choice, as is ground beef (my preference!). Using meat with a bit of fat in it helps to keep the filling juicy. And, of course, fat adds a lot of flavor too!

This post, originally published on Silk Road Recipes July, 2021, was updated with new content, photos and/or video in July, 2022. 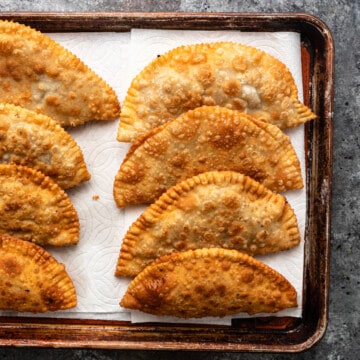 These are called empanadas in Spanish and are a stable in one form or another of street vendors in most of the Latin countries. The receipt is slightly different: we used pork or beef, however the addition of vodka definitely interesting.

Yes, I think every culture has their own hand pie! Hope you give these a try Joe.