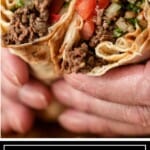 Tantuni wraps are Turkish street food from the town of Mersin. They’re filled with specially seasoned beef, onions, herbs, and fresh tomatoes. Served in lavash, a Middle Eastern flatbread, you won’t be able to resist!

Street food — does it get any better than that? Whenever I travel, the first thing on my agenda is to try a bit of local fare. There’s something so special about wandering around a new place with a delicious snack in hand. I can’t be the only one who feels this way!

I also couldn’t get enough of chebureki (meat hand pies) when I was in Crimea. And don’t get me started on Greek chicken souvlaki! I have a serious soft spot for Turkish street food in particular. Favorites include gozleme, a stuffed flatbread, and lahmacun, which is similar to pizza.

Today I’m adding one more type of Turkish street food to the lineup: tantuni wraps. They’re traditionally made with beef or lamb (I like to stick with beef) that has been seasoned and prepared with onions, herbs, and spices. They are the perfect pick-me-up when you’re feeling a bit peckish. If you want to bring a taste of the Mediterranean to your kitchen, you’ve got to try them yourself!

HOW TO MAKE TANTUNI WRAPS

1. Make The Onion Mixture. Combine your chopped onion, parsley, mint, paprika, sumac, and salt together in a small bowl. Be sure to combine thoroughly — then you can set it aside for later.

2. Season The Beef. Before you get started you need to trim and remove the fat from your beef. Cut it into small pieces, then place it in a bowl with the vegetable oil, paprika, sumac, cumin, cayenne pepper, and salt. Mix until well coated.

3. Pan-Cook The Meat. Place a skillet over medium-high heat and add the butter. Once it’s melted, add your seasoned beef and stir to cook until it is no longer pink. Add in a bit of water and toss. Lay a piece of lavash on top (you can also simply use a tortilla) and steam to soften it. Leave it to steam until you hear the meat sizzle. Remove the skillet from heat.

4. Put Your Wraps Together. Place your steamed lavash on your countertop or on a cutting board. Add a few tablespoons of the onion and herb mixture in a row, then place a row of chopped tomatoes next to it. Next, add your beef! Roll into a wrap and repeat with the remaining ingredients. Enjoy them while they’re hot!

Traditionally, this dish is made in a specially made pan called tantuni tavasi. The meat of choice (typically beef or lamb) is then pulverized and cooked in salted water before it’s fried. They are then served in lavash with fresh tomatoes, onions, and herbs. My homemade version doesn’t involve boiling the meat, but the flavors and texture are almost identical!

How Do You Eat Tantuni?

You can keep things simple and serve your Turkish-inspired creations as instructed above and on the recipe card. If you want to take the flavors up a notch, consider adding a bit of lemon juice and extra cumin. You can also serve it with some hot peppers on the side if you like spicy food. If you’re a sauce person, you could also pair it with a bit of homemade tzatziki!

What Is The Local Food In Turkey?

Looking for some more Turkish food to try? Some of my personal favorites include simit (Turkish sesame bread), kisir (bulgar salad), Turkish sweet roasted chickpeas, and I love adding biber salcasi, a Turkish red pepper paste to just about any savory meal. You also can’t forget about pide, a Turkish flatbread. Any and all of these dishes are worth a try! 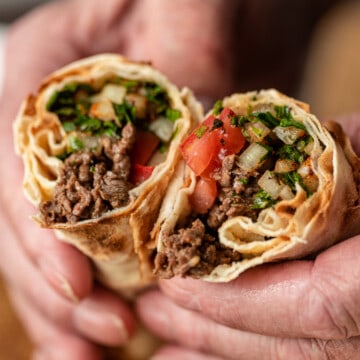 This sounds really tasty. I love cumin and sumac and all the other ingredients, so I’ll have to try this soon. I have everything except the Lavash, so may have to try your recipe for that also.

One of my favorites, too. Enjoy Rose!

thanks Dear, can i get kofte recipe, please,please

I have several for you to try Rose. Type "Meatballs" in search for all. Here is a direct link.