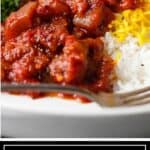 My eggplant stew is light, savory and aromatic, with tender aubergine, tomatoes and warm spices. Make this recipe for a cozy meatless meal!

Stews are a fantastic meal and most popular during cooler months of the year. The thing is, some people think of stew as heavy and hearty, and that is not always the case.

I have plenty of delicious and hearty meat stew recipes like Instant Pot Lamb Stew and Moroccan chicken stew. But once in a while, I like to have meatless meals. This Persian recipe proves that vegetarian stew can be satisfying, too!

Eggplant is a staple in dishes throughout the Middle East, appearing in dips like mutabal, condiments like ajvar relish and this savory Persian eggplant stew.

In Persian cuisine, the meatless aubergine stew is called khoresh bademjan. When it's made with meat (typically lamb or beef), it's known as khoresh bademjoon.

There are at least 7 varieties of aubergine/eggplant, and they come in various sizes and colors (see images of them here). The majority of them have very seedy flesh, and the seeds are what give eggplant its bitter taste.

Either Chinese or Italian eggplants are best for making this stew, as both have firm flesh and fewer seeds than the other varieties.

Avoid using the American variety, known as globe eggplant. It has a lot of seeds and softer flesh. It’s better used to make things that aren’t cooked, or are pan-fried, like eggplant parmesan.

Like tomatoes, squash, and several other "veggies", eggplants are botanically classified as a fruit. This is because they grow on vines and have flesh containing seeds.

If you love the flavors in this dish, you should also try my recipe for zaalouk. It's a delicious Moroccan eggplant appetizer!

Before you can start making the stew, you'll have to draw out excess moisture from the fruit. You do this with one simple ingredient; salt. 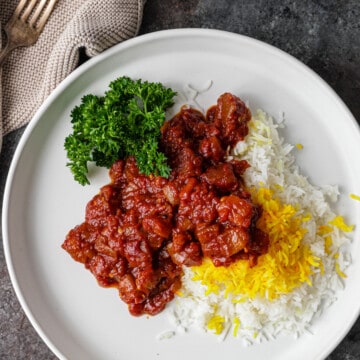