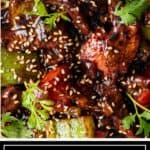 Pepper Steak with Onion and Tomatoes is a stir fry recipe for marinated beef and crisp vegetables in tangy ginger-garlic sauce. You can make in 20 minutes!

Stir fry dinners are an easy way to put a delicious and healthy meal on the table. Even better, it takes less than 30 minutes to whip up dinner in a wok!

Plus, making a stir fry is easy and economical, especially when you can use the odds and ends of vegetables already in your fridge. All you really need to make a quick Chinese stir fry are a few basic pantry staples for a sauce, plus your favorite protein and some veggies.

Speaking of protein, many people say that beef stir fry meat is tough. Honestly, it can be, but the key is using the right cut of meat and preparing it properly. I’ll cover those things for you in a minute.

If you travel to China, the chances of finding beef and bell pepper stir fry on a restaurant menu are slim to none. This is because the pepper steak recipe really isn’t Chinese at all!

It’s what some people call American-Asian, or Americanized Asian. Other foods like this are chop suey, General Tso’s chicken, and crab rangoon. They are Asian-style foods recreated by Westerners.

Description:
Beef or steak, tenderized quickly in a simple steak marinade, then stir fried with bell peppers and covered in savory ginger-garlic sauce.

Traditional versions of this dish are made just with beef or steak, and of course, green bell peppers.

To incorporate more vegetables into the dish (and because my garden was exploding), my recipe is for pepper steak with onion and tomatoes.

What’s the best cut of beef for a stir fry?

Because the meat is cooked quickly and over high heat, it’s important to use a lean cut of beef. Good choices are flank steak and top sirloin.

Unfortunately, many packages of “stir fry meat” in U.S. grocery stores include beef with connective tissue. These cuts require braising to break down the collagen, so they aren’t a good choice for stir fry recipes.

Why is my stir fry meat tough and chewy?

If you’re using a cut of steak or beef with too much connective tissue, the quick cooking method for stir frying won’t be long enough to tenderize the meat, leaving it very chewy.

Other reasons for a chewy steak stir fry include over cooking the meat, and/or not using a high enough heat.

Are pepper steak and pepper beef the same thing?

There are several different names for pepper steak stir fry, including pepper beef. However, there is another Asian stir fry called black pepper beef, which is completely different from the steak and bell pepper stir fry.

Serving suggestions for pepper steak with onion and tomatoes

I think that beef and bell pepper stir fry goes really well with rice, but some people like to serve it over Asian rice noodles or lo mein.

Because there are already vegetables in the stir fry, you really don’t have to serve a veggie on the side. That being said, a crisp, cool sunomono salad (without the shrimp) or Chinese cucumber salad would compliment the meal.

For an appetizer, something like a light broth soup, vegetable egg rolls or spring rolls would be a great addition. 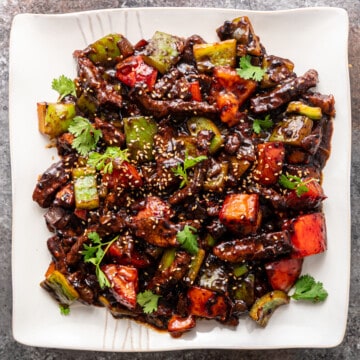