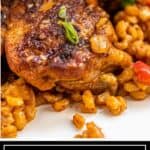 Chicken and barley is a hearty, healthy meal with Moroccan flair! Make this North African recipe for spice-rubbed chicken in just one pan!

Aromatic and flavorful, Moroccan spice blends are the secret to making their cuisine so memorable. Rich, warm spices like cinnamon and cumin compliment cooler flavors of herbs like mint and parsley.

When the contrasting flavors marry in a dry rub, the otherwise ordinary flavors of chicken and barley become a fantastic, flavorful feast!

This Moroccan spiced chicken recipe is one I found in an old magazine tear out. The ingredients have been adapted over time to suit my tastes, but I believe it to be from either Sunset or Cooking Light, circa 1990s.

There are two variations of this recipe. You can opt for a one-pan method to make on the stove top, or bake it in the oven, in a casserole form. Instructions for both versions are in the recipe card at the bottom of this post.

Video: How to Make Chicken and Barley

This recipe is very easy to make, but if you'd like to watch me make it step by step, check out the video in the recipe card below!

Use a small whisk or your clean hands to combine the spices together in a bowl. Then, press half of the spice mixture evenly onto both sides of the chicken thighs.

To Make Chicken and Barley Casserole in the Oven

All of the instructions are the same, up to the point where you simmer the dish.

Cover with a lid or sheet of aluminum foil and bake for 65 minutes.

Then uncover the baking dish and fluff the barley with fork. If there is still liquid present, cover and cook for about 5 more minutes.

Lastly, uncover the casserole dish again and let the chicken and barley sit for 15 minutes to completely absorb all the liquids.

Just before serving, garnish the dish with green onions and serve with some khubz or flatbread like lavash and a chopped veggie salad or some fresh fruit salad. 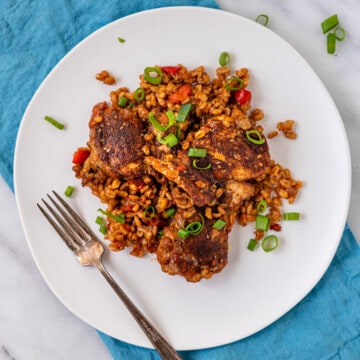 For the Stove Top One Pan Method

For the Baked Casserole Method

This is so flavorful! I was a bit short on barley so I used 1/2 barley and 1/2 farro, both pearled. This recipe is a keeper!

So glad you enjoyed this one Jeff!

This recipe is really great. Tonight I made it for the first time, and my daughter (who is visiting us) asked after the meal if she could put it away before she ate it all. My only additions to the recipe was to add a half teaspoon of salt, and an eighth of a cup of sliced almonds in the post simmer cool down period. I used hulled barley rather than pearled barley, so I added 20 minutes to the simmer time. This made the chicken thighs a bit more braised than the recipe pictures suggest, but that was all good.

So happy you and the family enjoyed this one Dan! Thanks for taking the time to come back and let me know.

Kudos to the author for crediting Cooking Light magazine's recipe printed in the 1990's. I misplaced my clipping of this recipe and was thrilled to find it here. It's easy, absolutely delicious, nutritious and so cheap to make! Try it with a drizzle of plain yogurt whisked with a bit of harissa and/or sumac. Thank you for posting 🙂

Thank you for the kind comment! I am so glad you came across this recipe!

I loved this dish. So much flavor and it's very colorful. I will most definitely make this again.
A couple of things you could do extra to this dish would be adding additional vegetables and maybe a light cream sauce to drizzle on at the end.

Thank you so much Erin! I am so glad you enjoyed it! That is a great idea!

I hope you enjoyed it Ramya!