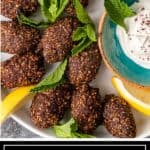 Kibbeh is a Lebanese comfort food of baked or fried croquettes filled with spiced meat. Make this kibbeh recipe to serve on a mezze platter!

Bite sized or small portion appetizers are popular everywhere you go. In Greek and Lebanese cuisine, they serve them on a large platter known as a mezze (or meze).

A typical Levantine mezze might include a dip like mutabal or a cheese spread like tyrokafteri served with an assortment of breads like khachapuri, simit, and khubz for serving. Another popular addition to many mezze platters are fried or baked appetizers.

Favorite items on a mezze platter in Lebanon include savory bites such as couscous cakes, cauliflower fritters, and lamb or beef croquettes known as kibbeh. These are a delicious treat made of and filled with a mixture of ground meat, bulgur wheat and earthy Middle Eastern seasonings.

Description:
The Arabic word kibbeh means, “ball”, or “form into a ball”. The outer casing is made of ground meat, bulgur wheat, onions and mint leaves. That mixture is formed into football-shaped croquettes filled with more ground meat that’s seasoned with Middle Eastern spices and pine nuts.

Although these special beef croquettes are popular in many countries, kibbeh is so loved by the Lebanese people, it is the national dish of Lebanon.

There are plenty of photos below that show the process of making the filling and casing for beef or lamb kibbeh below. To see the process from start to finish, watch the video in the recipe card at the bottom of this post.

Some kibbeh recipes call for soaking the wheat, but I don’t think it’s necessary. Just place it into a fine mesh strainer and rinse with cool water until the water runs clear.

The outer shell is a mixture of soaked bulgur, onion, spices and raw ground meat.

NOTE: You want the mixture to have a consistency that will hold together well when the filling is inside.
For this reason, I recommend using a food processor to combine the raw meat with the onion and spices.

Don’t own a food processor? It’s fine; just be sure to finely grate the onion. Rather than using a knife, grating is much easier using the small holes on a box grater.

There are a couple of steps involved here, but to keep cleanup at a minimum, I use the same pan to cook everything for the filling.

Tips for Stuffing and Rolling

If you'll be serving these as a snack or light appetizer, it's nice to include some Tahini Yogurt Sauce for dipping.

This kibbeh recipe is a fantastic addition to a mezze platter! I like to serve it with flatbreads and spreads like mint or tomato chutney.

Croquettes also go well with salads, and it's okay not to stick strictly with Middle Eastern cuisine; mix things up!
I like to include a variety of salads, like Greek feta salad, Mast o Khiar (Persian cucumber salad), and Kisir (Turkish bulgur salad). 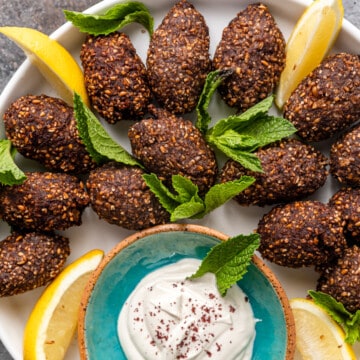