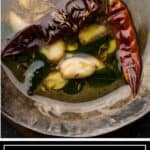 Indian tadka involves frying whole and ground spices to unleash more of their flavor and aroma. Read on to learn about the art of tempering spices to make your food taste even better!

Indian cuisine is popular around the world, and for good reason. Their dishes are aromatic and full of vibrant flavors, and occasionally, a burst of spicy heat.  Who can resist a mouthwatering butter chicken, chana masala, or dal gosht stew?

Some of the vibrant flavors in those Indian meals come from an infused cooking oil or ghee that is added to the dish, either during or after the cooking process.

The process itself (a verb) and the resulting liquid (a noun) share the same name, or rather, one of several names, depending on the region it's made in.

The Hindi word tadka is a homonym. Think back to school and you may recall learning that homonyms are words that have more than one meaning. (The dog will bark vs. the bark on a tree.)

In English, tarka means, to temper, or tempering.

The Indian tadka technique is, at its core, very basic, and it isn’t a difficult process to make one, but it does require some planning and prep work to prevent things from burning.

NOTE:
If you make chocolate confections,  you may be familiar with tempering chocolate, which is completely different from tempering spices.

Tempering spices involves frying or roasting whole or ground spices in a cooking oil or another fat (typically ghee) to release their essence.

Again, the tarka technique is the physical act of blooming a spice mixture. The resulting spice-infused oil, also called a tarka, is then used to add flavor to a dish.

When to Make and Use Indian Tadka

As you’re creating a recipe, there are 3 ways to use the infused oil to add flavor to the dish.

Regardless of when the tarka is made and added to the dish, the ingredients will receive a punch of vibrant flavor and incredible aroma!

What spices and leaves are in tadka?

The actual spices in a tarka will vary depending on the dish being made. Essentially, any whole or ground spice may be used. Various kinds of chiles, ginger, garlic and shallots. Also, edible leaves such as curry, bay leaf, and kaffir lime leaves are great choices for an Indian tadka.

What kind of oil is best for tempering spices?


While technically, any cooking oil or fat could be used to make a tarka, those with a high smoke point are best (canola oil, grapeseed oil, peanut oil, safflower oil). This is also why ghee or clarified butter are often used. You’ll want to use something with the least likely chance of burning.