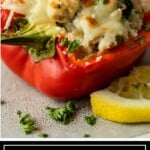 These Greek stuffed peppers have a filling of chicken, spinach, rice and cheese. Make this recipe for dinner tonight or freeze for later!

Mediterranean cuisine relies heavily on the use of vegetables, whole grains and lean proteins.

I prefer stuffed peppers that are completely soft, so I bake them unfilled for 25 minutes, and then bake again after the filling is added.

If you’re short on time, a quick 2-minute cook in boiling water will par-cook the vegetable, which shortens the cooking time.

After blanching, place the peppers under cold running tap water, or into an ice bath. Doing this immediately stops the cooking process.

Although it’s possible to make Greek stuffed peppers using whole bell peppers, cutting them in half is another way to reduce the cooking time. Plus, it allows you to serve more people, as half of a stuffed pepper is generally perfect for most people.

What to serve with ground chicken stuffed peppers

The Greek stuffed peppers are quite filling on their own, but a whole grain Mediterranean barley salad would round the meal out nicely.

Or, for something a bit lighter, make a fattoush salad, or serve with fresh fruit. 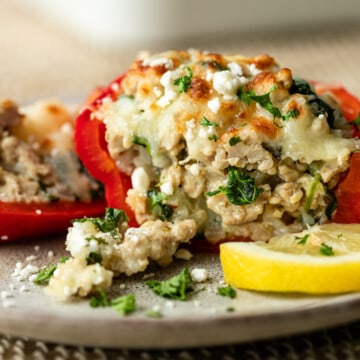 These were outstanding and so easy. Love the use of ground chicken and the flavors were delish!

Thanks Kerry! I love the flavors in this and they are great leftovers as well. Super easy!

I understand that your nutritional values are estimated, but are they for the whoke recipe or per portion. The recipes sound fantastic and I am trying to follow a low carb diet

The recipe nutrition information is per portion/serving Trisha. Hoe you enjoy! 🙂