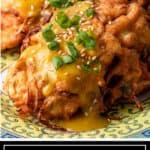 Egg foo young is classified as American-Chinese cuisine. Along with carryout favorites like chop suey, General Tso’s, beef and broccoli, and sweet and sour, the dishes aren’t necessarily authentic Chinese.

While some were created by chefs in Asia, the recipes were adapted in the U.S. to include ingredients that Americans find more desirable. Most (if not all) do include some Chinese flavors though.

The origins of egg foo yong date back to 1849, during the American gold rush. Apparently, cooks in Shanghai invented the dish, but it became an American recipe when it was served in the United States to large groups of Asian laborers who were panning for gold.

This recipe includes chicken, but there are several versions of the Chinese omelette. Foo yung versions include pork, shrimp, beef, and there’s also a vegetable egg foo young.

This dish is an interesting cross between a deep-fried chicken omelette and an egg fritter. It almost always comes with a serving of deliciously creamy egg foo young gravy.

Description:
Whole eggs are combined with flour, a variety of spices, vegetables, and dark or white meat chicken. The egg mixture is pan fried in a wok and served with savory egg foo young gravy.

If you've made my pakoda recipe, or fritters of any type, the process of making foo young is pretty much the same.

Nothing fancy here, just use a mixing spatula to combine everything. You may want to use a fork to break the egg yolks first; it will help to incorporate them in with the other ingredients.

Be sure that whatever cooking oil you use has a high smoke point. These are oils that can handle the high heat without scorching or burning. Good high smoke point oils for frying are peanut, canola, avocado, and grape seed.

To keep the foo yung warm while you fry the remaining batter, set your oven to 200°F. and put them on a wire rack set over a baking sheet in the oven.

The gravy is SO good and beyond simple to make. All you do is whisk the ingredients together in a saucepan over heat and thicken it with a cornstarch slurry. It couldn’t be easier!

It’s a creamy and savory gravy, with a tiny little kick of spice from cayenne pepper (which you can omit, if you’d like). Typically, the gravy has a brown color, but I include turmeric, which gives it a beautiful golden yellow hue.

The gravy can be used for so much more than serving over the chicken egg foo young, though! Treat it like you would a brown gravy; serve it over potatoes, rice, meat or vegetables- it’s fantastic.

If you have any leftover egg foo young gravy, store it in the refrigerator and reheat it in a microwave or saucepan on the stovetop. The leftovers will keep for about a week in the fridge.

How do you serve chicken egg foo young?

Typically, the fried Chinese omelettes are served with a topping of egg foo young sauce. Because they are packed with protein and vegetables, many people choose to serve them with a starch like white or fried rice.

Can you freeze egg fu young?

Like most deep-fried foods, the fried omelettes don’t freeze well for too long, but they’ll keep in the freezer for a couple of weeks. Cool them completely, then wrap individually in plastic wrap. Store the individually wrapped egg foo young in a large freezer bag or airtight container. 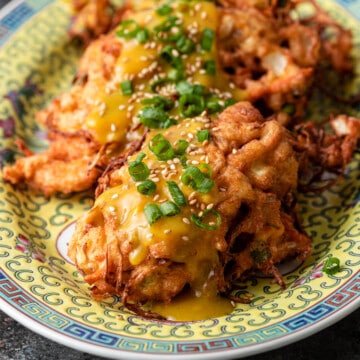 This recipe sounds delicious and not too difficult to make. I was wondering if this can be made in the air fryer rather than deep-fried? Also - is there a substitute for oyster sauce, since I don't have it on hand.

I have not experimented with the air fryer, sorry, but I can't advise there. Dark soy sauce, regular soy sauce + equal fish sauce or hoisin maybe decent alternatives for the oyster sauce Jan.