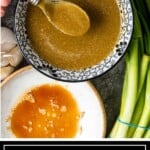 Bulgogi sauce is a Korean BBQ sauce or marinade with a slightly sweet, umami flavor. Use this recipe to make the Korean condiment at home using simple pantry ingredients!

There are many delicious Korean dishes that are popular worldwide. Here in the United States, there are Korean restaurants in every big city, serving foods like galbi jjim (braised short ribs), bibimbap, and of course, Gochujang sauce.

But of all the many Korean foods to choose from, bulgogi Korean BBQ is arguably one of, if not the most popular dishes in the U.S..

Bulgogi is a dish featuring strips of marinated and seasoned meat, and it’s incredibly delicious. There are seasonings on the meat itself, but I think the bulgogi marinade is what makes the dish so flavorful!

I’ll be sharing my bulgogi flanken short ribs recipe with you in a couple of days, so be looking for that! Today, I’m sharing the recipe for the Korean BBQ sauce.

Bulgogi has sweet and savory flavors, with hints of pear or apple, ginger, and garlic. In my version, I use applesauce, but the flavor is still fruity and fresh.

Now, in case you're wondering why I didn’t just share this Korean BBQ sauce recipe in the upcoming bulgogi beef post; I could have. Honestly though, it’s great for so much more than a marinade or dipping sauce for Korean barbecue.

I think you’ll want to have this recipe handy to use for other purposes, so it definitely deserves a post of its own. Truth be told, as I'm writing this, my plan is to use it in my shrimp stir fry tonight. #newrecipetest

First, I’ll show you what ingredients you’ll need to make homemade bulgogi sauce. You may even have everything already because my recipe uses simple pantry ingredients.

You can whip up a batch in less than 5 minutes, for a fresh tasting condiment that’s better than any store-bought brand. I'll also share some ideas of other ways you can use it as a sauce or marinade.

There’s absolutely nothing better than the fresh flavor of grilled marinated meat and that’s the first use for bulgogi sauce. It adds flavor and tenderizes the meat.

Making it couldn’t be simpler; just add the marinade ingredients to a blender and puree for a couple of minutes, until it’s a smooth consistency.

Note:
Some people heat the ingredients in a pan on the stove first, to dissolve the sugar. Personally, I don’t think that's necessary for a marinade.

However, if you’re planning to use the bulgogi sauce for dipping, that’s different. The marinade may be a little too thin, so you'll need to cook it down for a few minutes.

How to convert marinade into Korean BBQ sauce

Other uses for bulgogi sauce

As a marinade: Because bulgogi can be made with any type of meat, this recipe makes a fantastic marinade for just about any type of protein! Bulgogi beef is the most common, but don't let that stop you from using it on chicken, pork, lamb, or anything else you'd like.

Here are a few other ideas for using it: 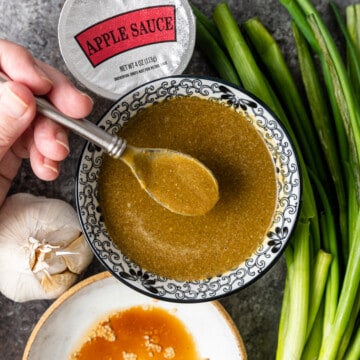 This was one of the best recipes I have tried this year haha. Such great flavor, I liked it so much I tried is with shrimp and it was fantastic. Just sweet enough but not to sweet with a wonderful after taste. Must, must , try